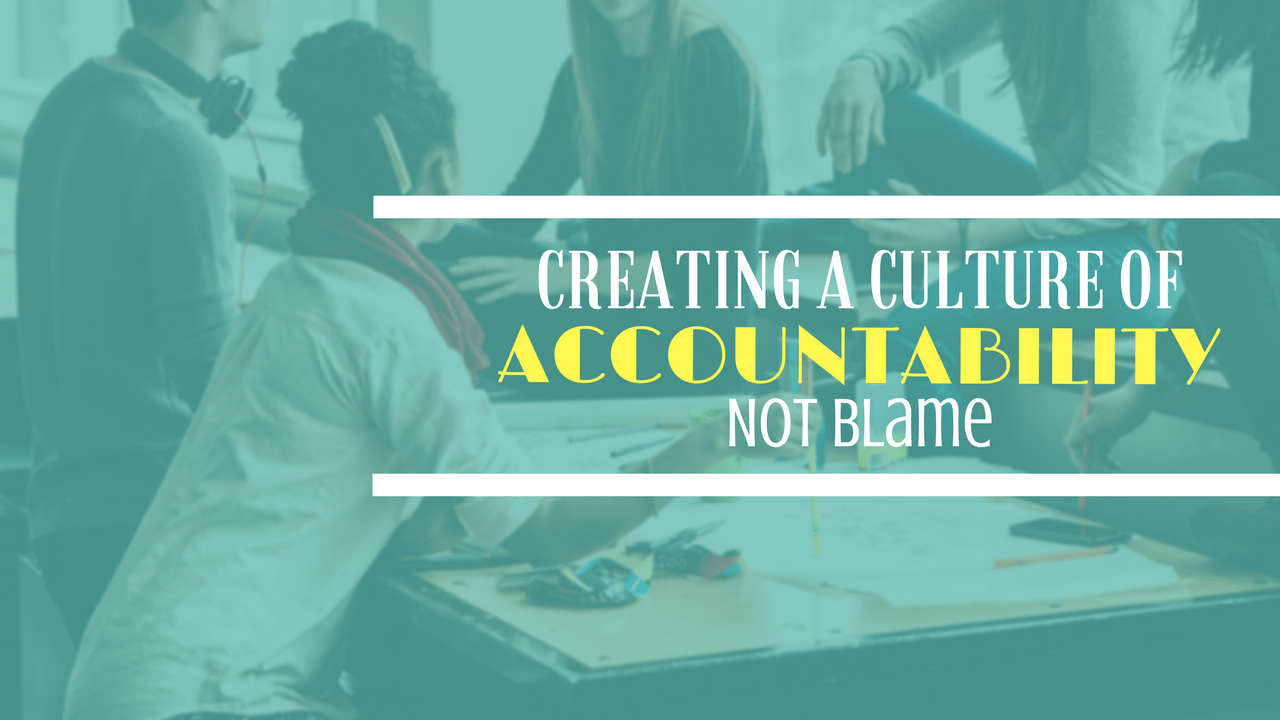 Creating a Culture of Accountability, Not Blame

If you’re a leader, you’ve probably heard the quote “Culture eats strategy for breakfast.” Unfortunately, when it comes to which one gets more attention from executives, it’s strategy, without question. This is perhaps because, to most executives, strategy is easier to manage. What many leaders fail to realize is that if they aren’t managing their culture, their culture is managing them. If you have any doubt as to which category you fall in, ask yourself this question, is your culture working for you, or against you?

If you’ve ever felt like your culture wasn’t working for you, odds are it was a culture of blame. Blame is an accountability killer. Ironically, we live in a society that has blurred the lines between the words “accountability” and “blame.” In fact, many people use those words interchangeably. Leaders who don’t distinguish between the two are laying the groundwork for a culture that works against them.

The Difference Between Accountability and Blame

When people say “That politician must be held accountable for his actions”, what they’re really saying is “That politician is to blame and must be punished for his actions.” Accountability is not the same thing as blame or punishment. To be accountable means to take responsibility for results, good or bad. It means finding solutions to problems and applying lessons learned in order to improve future results. Being accountable is constructive because it focuses on the future.

To be blamed, on the other hand, is to be accountable for culpable actions. Blame is often assigned before all the facts are known and assumes that people, not the systems they operate in, are the problem. Blame is focused on the past and on punishing the offender. The thinking behind assigning blame is that identifying the offender and punishing them will correct the poor behaviour. The reality is that the only thing people learn from being blamed is to become better at hiding their mistakes.

[bctt tweet=” “The only thing people learn from being blamed is to become better at hiding their mistakes.”” username=””] 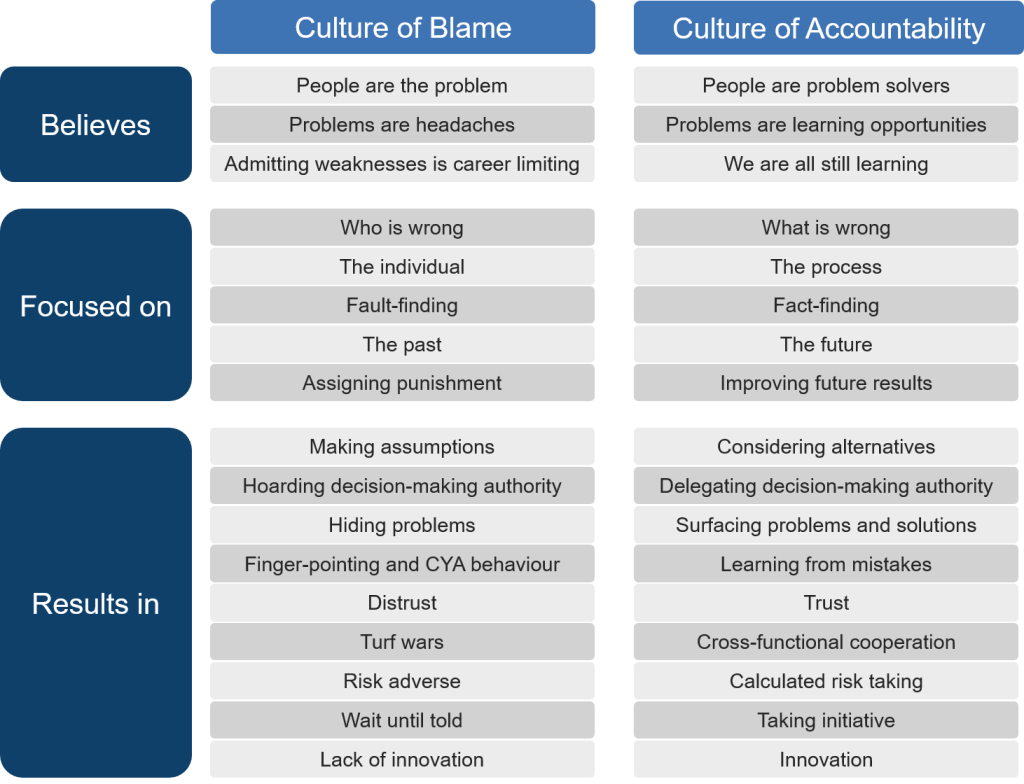 The Misnomer of “Human Error”

Historically, most workplace problems and accidents have been blamed on “human error.” Why? Because it’s easy. It’s human nature to take mental short-cuts and look for simple explanations and scape-goats. The old adage “To err is human” is more accurately stated “To blame is human.”

We now know that most unintended outcomes are usually caused by a combination of factors, and that flawed systems (or “processes”) are often the prime culprit. Take for example the CEO whose sales team was providing lack-luster results. The CEO was frustrated that the salespeople weren’t working together as a team despite his continued urging to do so. He discovered that when his sales associates came across a lead in another salesperson’s territory, they wouldn’t pass on the lead to the other salesperson. “How could they behave so selfishly?” the CEO wondered. What the CEO didn’t consider is that he was offering an all expenses-paid trip to Bermuda only to the top salesperson. As the saying goes, “Every system is perfectly designed to get the results it gets.”

Cultures of blame are inherently inefficient. Countless dollars are essentially thrown out the window (think stacks of $100 bills) from the three self-destructive cycles that are put into motion as soon as someone in the organization is blamed. These three cycles are the Cycle of Inaction, the Cycle of Ignorance, and the Cycle of Infighting.

The very act of blaming someone is a form of punishment. Its primary intent is to shame the accused. People tend to fear punishment and shaming, and fear is generally paralyzing. When a manager blames an employee for making a mistake, the employee tends to recoil into the safety of “wait until told.” Almost overnight, employees stop taking the initiative, and instead, bring all problems to their manager to await instructions on how the boss wants them to be resolved. This, of course, frustrates their manager. Employees sense their boss’s frustration with them, but aren’t quite sure why. This state of uneasiness causes once confident, competent employees to turn into mumbling, bumbling, mindless servants paralyzed by fear.

Stephen Covey aptly named this cycle of behaviour “Gofer Delegation” because the boss ends up doing all the thinking and the employees simply carry out the boss’s orders. The fear of blame not only causes employees to lose confidence and shrink from action, but it also stalls their career development. Employees caught in the Cycle of Inaction tend to either stagnate in their careers, or they eventually leave so they can use their brain where it’s appreciated.

The ostensible rationale for blaming someone is that if you sufficiently rub their nose in their mistake, the offender will think twice before making the same mistake again. Studies (and common sense) have proven otherwise. Instead of making fewer mistakes, people in blame and shame cultures simply get better at hiding their mistakes. Meanwhile, executives are oblivious to what is really going on in the trenches. They aren’t getting the results they want, but they don’t know why. So they aimlessly introduce new incentives or quality programs hoping this will change things. The real reasons for the poor results remain obscured and no learning occurs. The new ‘fixes’ cause an onslaught of unintended consequences and produce more problems, which people try to hide.

When people within an organization fear their leaders and each other, they naturally expend a tremendous amount of energy trying to protect themselves. Simon Sinek taught this principle in his TED talk entitled Why good leaders make you feel safe. When people inside an organization fear each other, they engage in a subtle war called “corporate politics.” The goal of this war is to deflect blame and defend your ‘turf.’ Obviously trust and cooperation cannot exist in such an environment. This makes everybody engaged in this war less effective at their jobs for two reasons:

The more that people engage in blame wars, the more unresolved problems will pile up, which in turn increases the need to deflect blame onto others.

The following eight practices lay the foundation for creating a culture of accountability.

Want to learn how to create accountability in your organization?