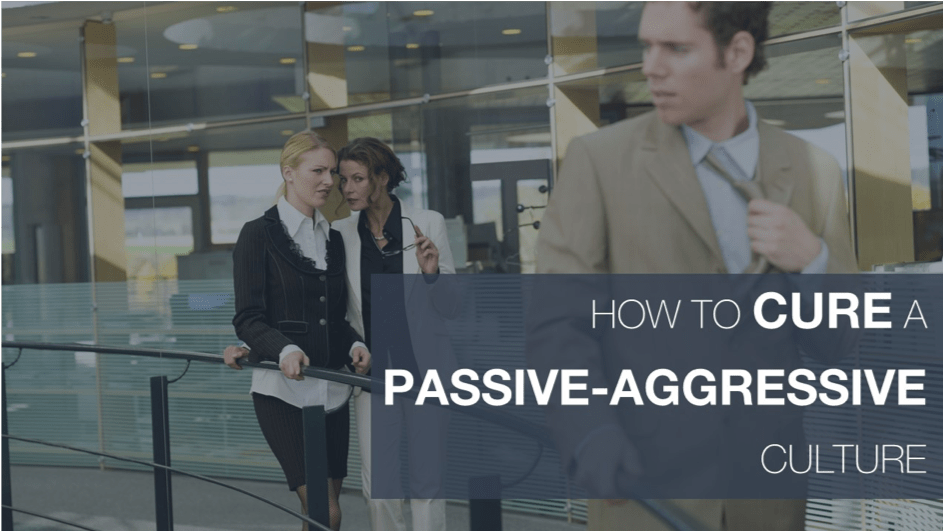 How To Cure a Passive-Aggressive Culture

It’s one thing to have to deal with one person at work who uses passive-aggressive tactics, but what do you do when your workplace culture actually promotes this type of dysfunctional communication and behaviour?  Do any of these situations sound familiar?

Watch out, passive-aggressive behavior is contagious!

Here’s how this dysfunctional behaviour spreads. When people don’t feel like they can be candid with others, sooner or later, they end up demonstrating passive-aggressive behaviour which provokes others to respond in kind.  All the while, neither party knows exactly why the other is behaving this way.  They both naturally assume that it’s because the other person is a jerk.

Have you seen this cycle play out in your workplace?

Can you see your part in perpetuating this cycle?

The linchpin of the Passive-Aggressive Cycle is the feeling that you can’t give someone candid feedback.  Remove the fear of giving feedback and you break the cycle.

But before we go there, take a moment to consider how your behaviour may be contributing to the Passive-Aggressive Cycle in your workplace.  Think of someone that you want to give feedback to but feel you can’t. Have you exhibited behaviour towards them that could possibly be interpreted as passive-aggressive?

Now, continue reading for some thoughts about how to cure a passive-aggressive workplace culture.

Most of us have not had an overabundance of positive examples when it comes to giving and receiving feedback.  In high school we received report cards but our teachers rarely reviewed them with us. In university we received letter grades but would be lucky to get a few minutes with the professor for some helpful tips on how to improve. And it doesn’t take long after entering the workforce before accumulating numerous examples of managers who delivered feedback poorly or simply didn’t provide any at all.

Unfortunately, outside of the cozy confines of our family, we don’t have many great examples of authority figures providing us with effective, helpful feedback.

This finding should not be surprising.  People who are more sure of their strengths are secure enough to shine a light on their weaknesses.  And insecure people are generally less willing to say something that may hurt their likability.

Let me be frank, if you are a manager and you avoid giving others feedback (or sugar coat it when you do), you are the primary cause of your team’s poor performance.  Much of employees’ poor performance can be traced back to a leader’s failure to point to the destination clearly and frequently enough, and to provide enough unambiguous guidance on individual and team performance.

Unfortunately, most managers are delusional about how well they provide feedback.  For example, I recently met with an employee who told me she had the distinct impression that her manager holds back and doesn’t really tell her how he feels about her performance.  An hour later I met with her manager who declared to me that everyone on his team knows where they stand with him.

This disconnect between a manager’s perception of how well they provide feedback and reality is quite common.  In a survey of over 11,000 direct reports, Zenger Folkman asked employees how effective their managers were at providing honest feedback on a regular basis. Only 7% gave their managers high marks.

The two essential duties of leadership are to 1) constantly point to the destination, and 2) guide others to it by providing frequent feedback about how well individual efforts are moving the team closer to the destination.

So what’s a manager to do?

If you are a manager and know that you are uncomfortable providing corrective feedback, then you have three options.

Managers must set the example by improving their ability to provide honest, clear, and respectful feedback. When they do this, the rest of the organization will learn from their examples and fear feedback less.  As more people become comfortable giving and receiving feedback, the Passive-Aggressive Cycle will dissipate creating an environment where a culture of accountability can flourish.