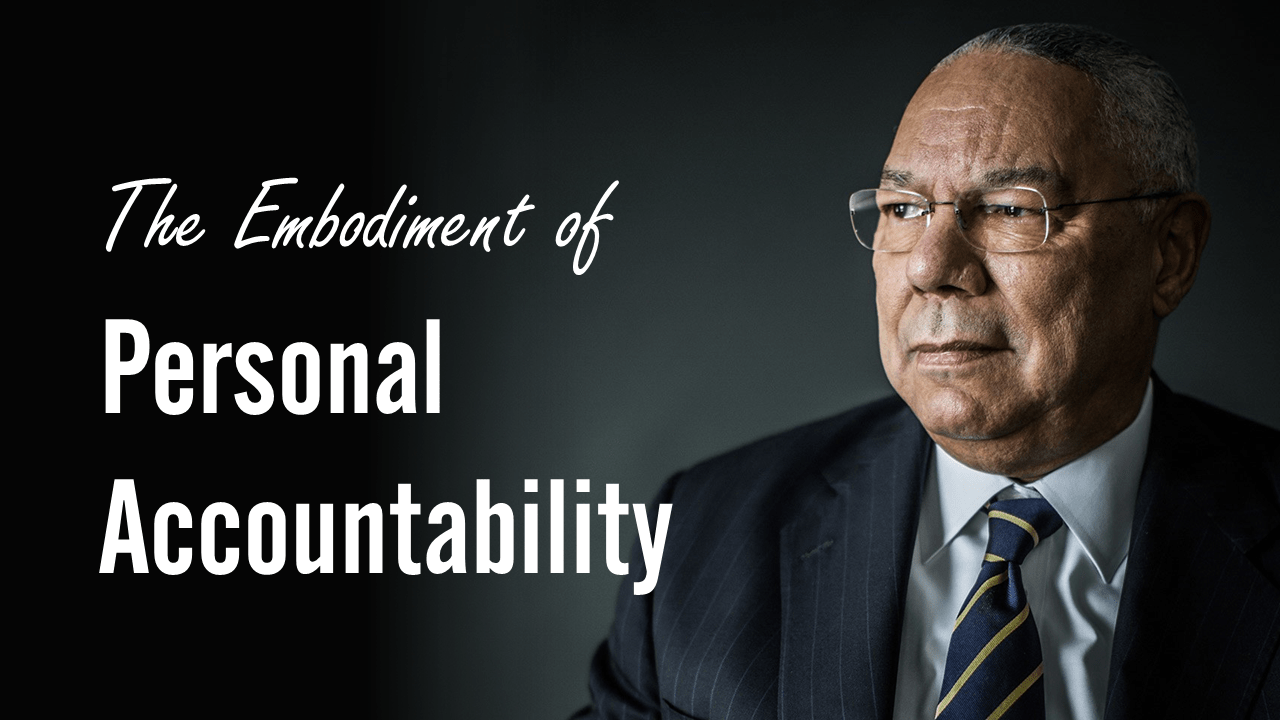 The Embodiment of Personal Accountability

A hero has left us.

General Colin Powell, former U.S. Secretary of State and Chairman of the Joint Chiefs of Staff, passed away on Monday, October 18, 2021.  The son of Jamaican immigrants, Powell overcame racism and segregation to become the first Black American to hold several top positions in the US government, advising four different presidents from Reagan to Bush.

Colin Powell led the US military through a nearly flawless execution of the 1991 Gulf War to expel Iraqi troops from Kuwait and had a strong hand in shaping US foreign policy for decades.  However, despite his many achievements, Powell’s legacy was tarnished after his infamous speech to the UN convinced the world that Iraq was producing weapons of mass destruction (WMD) and that the United States was justified in going to war with Iraq.  No WMDs were ever found, and his case to the UN is regarded as one of the worst intelligence failures in US history.

Although the media coverage of this mistake may be justified, it grieves me that his extraordinary response to his mistake was largely overlooked.  In today’s society where media pundits regularly castigate people in leadership or high-profile positions for not being accountable, Colin Powell’s example will be sorely missed.  Nobody took accountability as well as Colin Powell did.  We can all learn something about accountability from his great example.

In the summer of 2002, Powell caught wind that President Bush was planning to invade Iraq because of intelligence claims that Saddam Hussein was manufacturing WMDs. However, Powell hadn’t heard very much discussion about what the president planned to do after the invasion. Powell famously told the president “If you take over a government, guess who becomes the government and is responsible for the country? You are. So if you break it, you own it.”

Instead, Powell convinced Bush to try to resolve the WMD issue diplomatically through the United Nations. From that point on, Bush gave Powell that responsibility. The primary source of Iraq’s WMD program was a partially completed national intelligence report. This report was circulated around Washington and was accepted by America’s military commanders and most of Congress, but the evidence contained in the report was mostly circumstantial and inferential.

On January 30, 2003, President Bush told Powell that he wanted Powell to present their case against Iraq to the UN on February 5, just a few days away. However, Powell’s staff didn’t have a copy of the report. When they received it later that day, they discovered it was a disaster and completely unusable. They had four days to prepare their case to the UN, essentially having to start from scratch!

Powell moved his staff to the CIA to work with the CIA director and his team to piece together the report from the raw materials on which the original report was based. They worked day and night trying to come up with solid evidence and discard any items that seemed like a stretch. They finished their case the night before Powell was to present it to the UN, and the CIA director stood behind every word of it.

Powell presented a powerful case to the UN, and the war began six weeks later. The rest is history. No WMDs were found.

Powell calls this part in his personal history “One of my most monumental failures, the one with the widest-ranging impact.”

How did Powell respond? He could have blamed the shaky sources the CIA passed off as reliable intelligence. He could have blamed Vice President Cheney for pressuring him to use less than credible sources. He could have blamed the unusable intelligence report he was given or the lack of time he had to prepare his case. Instead, Powell blamed himself. “I am mad mostly at myself for not having smelled the problem,” he said. “My instincts failed me.” Powell didn’t stop there. Acknowledging your role in problems is next to useless unless you also extract lessons learned. “I learned from this experience,” he writes. “I learned to be more demanding of intelligence analysts. I learned to sharpen my natural skepticism toward apparently all-knowing experts.”

Powell provides the following recipe for dealing with failure: “Learn from it. Study how you contributed to it. If you are responsible for it, own up to it. Though others may have greater responsibility for it than you do, don’t look for that as an escape hatch. Once you have analyzed what went wrong and what you did wrong, internalize the lessons learned and then move on.”

Rest in peace General Powell knowing that your legacy of integrity and accountability is the legacy I choose to remember.

Much of this article is an excerpt from the book How Leaders Can Inspire Accountability.