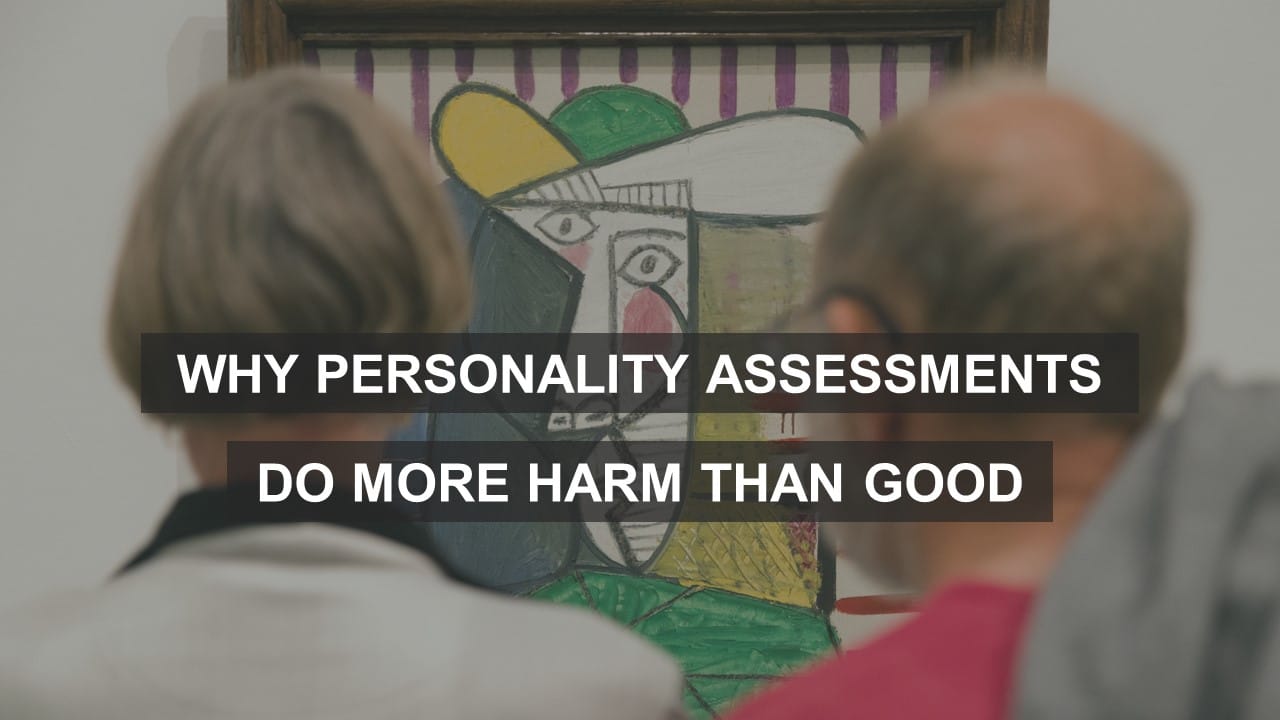 Why Personality Assessments Do More Harm Than Good

Wouldn’t it be great if there existed a magical tool that could peer into a person’s soul and tell you how well they’ll turn out if you hire or promote them?  That’s pretty much what the nearly one-third of companies who use personality assessments believe they’ve found.  But what if there are flaws in this magical tool?  What harm could companies be unknowingly inflicting on people by basing hiring or promotion decisions on flawed data?

The Real Danger of Personality Assessments

The real danger of personality assessments is not that they don’t work at all, the danger is that they work differently than advertised.

Personality assessments don’t provide an accurate depiction of part of a person’s personality, they provide a distorted, misleading version of the whole picture.

Personality assessments attempt to discover aspects of your personality such as:

The problem is, we could be (and often are) all of these things depending on the situation.  But an assessment can’t possibly determine how a person will behave in every given situation.

Take me for example.  I fit the introvert profile almost perfectly.  Put me in a social setting with lots of people and I become a wall flower.  But put me on stage with a microphone in front of lots of people and I’m in my element. Would a personality assessment account for that slightly different circumstance?  Not a chance. I’d be placed squarely in the introvert category and provided boilerplate personality descriptors based on that classification.

Here’s an example of how personality assessments, which can’t possibly grasp the full context of a person’s personality, can lead to potentially inaccurate, damaging conclusions.

Not very long ago I considered adding personality assessments to my service offering.  As part of my research, I decided to take an assessment from an assessment provider who advises boards of directors on executive recruiting decisions.  The results of the assessment indicated that I’m not very good at reading people and I therefore wasn’t suitable for an executive level position. That’s an interesting revelation given that I make my living by selling my services to rooms full of CEOs.  (Reading and responding appropriately to body language and subtle cues is an essential skill to being an effective presenter and facilitator.)  When I explained this to the assessor during the follow up interview, she refused to believe that I possessed the talent to read people.  She was so convinced of the validity of her assessment that she created a no-win scenario for me to respond to in order to ‘prove’ her assessment was right.

Imagine if I took that assessment BEFORE I had irrefutable evidence to the contrary?  I may have decided against pursuing my greatest career dream because an assessment told me I lacked a talent that is clearly one of my strengths.  Now imagine if an employer was making employment-related decisions, such as whether to hire or promote me, based on that assessment. Those types of false negatives that result from an assessment’s narrow view of a person’s personality have the potential to ruin lives.

When I mentioned this point to a friend of mine who administers a certain personality assessment, she acknowledged this fact and correctly observed that people change over time which will be reflected in their personality assessment scores.  So even if personality assessments could reliably predict future performance, the predictions would only be useful as long as the person doesn’t change.  Except, people do change.  And those with the greatest potential change the most.

In addition to overt attempts to manufacture better results on personality assessments, there is a more subtle, unconscious sort of gaming that is virtually impossible to avoid. Because we know it’s a personality assessment, and we know that the people making us take the assessment take the results seriously, this undoubtedly biases our responses.  Every time we go to choose an answer, we can’t help but think “What answer do they probably want to hear?  What answer will make me look the best?”

This is precisely why researchers keep the true purpose of their psychological studies hidden from their test subjects.  If the subjects knew the true purpose of the study they were participating in, it would undoubtedly bias their behaviour, and therefore, invalidate the results of the study.  I find it laughable that the makers of psychometric (personality) assessments almost always claim that their assessments are “scientifically proven”, and yet they fail to meet this most basic standard of scientific rigor.

We Don’t Know Ourselves

A study published in the Journal of Personality found that employees themselves are about the worst judge of their own personalities.  The study concluded that co-workers and even family members were better judges of an employee’s personality than the employee themselves. The study’s author, professor Brian Connelly of Toronto’s Rotman School of Management observed “If we’re basing all the responses on self-reports, which is the norm, rather than having somebody else giving them the feedback, then we may be handing people’s biased perceptions right back to them.”

Another problem with personality assessments is that we answer them based on our current situation and experience.  We can’t possibly know or even indicate our potential in an area where we have no experience.  When I was an HR professional, I only thought of myself as an HR professional, not as a business owner.  Had I taken a personality assessment when I was a director of HR to determine if I could ever own my own business and succeed in sales, I would have undoubtedly unconsciously biased my responses away from having any skill in sales.

Further clouding our own self-knowledge is the perception our boss has of us.  Our boss’s opinion of us is perhaps the most important opinion of all when it comes to our economic survival and our psychological well-being. If you happen to have a terrible boss, that is likely going to negatively impact your own self-perception and reflect negatively in the results of a personality assessment.

The reason people believe that personality assessments ‘work’ is the same reason people think horoscopes work.  When we believe in the validity of some instrument that claims to give us insight into ourselves, we instinctively look for evidence to confirm that insight.

Psychology author and blogger Hanan Parvez performed an experiment to test the validity of horoscopes by reading the Leo horoscope to his sister who was Scorpio.  He then asked her how true she thought it was.  “To my astonishment, she told me that all of it was true and matched her current life perfectly. I then revealed to her that I was actually reading a Leo horoscope!”  Parvez refers to this common response to personality assessment results as the “That’s me!” syndrome.

A personality assessment will almost certainly reflect back some things we already know about ourselves which leads us to believe “This must be true.”  When the assessment provides “new” information we didn’t already know, human tendency is to look for confirming evidence instead of questioning the validity of that information.  That’s the confirmation bias at work, and that’s why people who take personality assessments are likely to think they work.  It’s tough to avoid the trap of thinking “If some of it’s true, then the whole thing must be true.”

To use personality assessments to exclude people for employment or promotion is not only unjust, it is unethical.  Would you use a coin toss to decide between one candidate or another for promotion? If this seems at all morally objectionable to you, why then is it less unethical to base decisions that dramatically impact other people’s lives on less than 100% valid data?

I hate to be the guy that tells you there’s no Santa Clause, but there is no magic short-cut to fair, transparent, performance assessment.

There is no magic short-cut to fair, transparent, performance assessment.