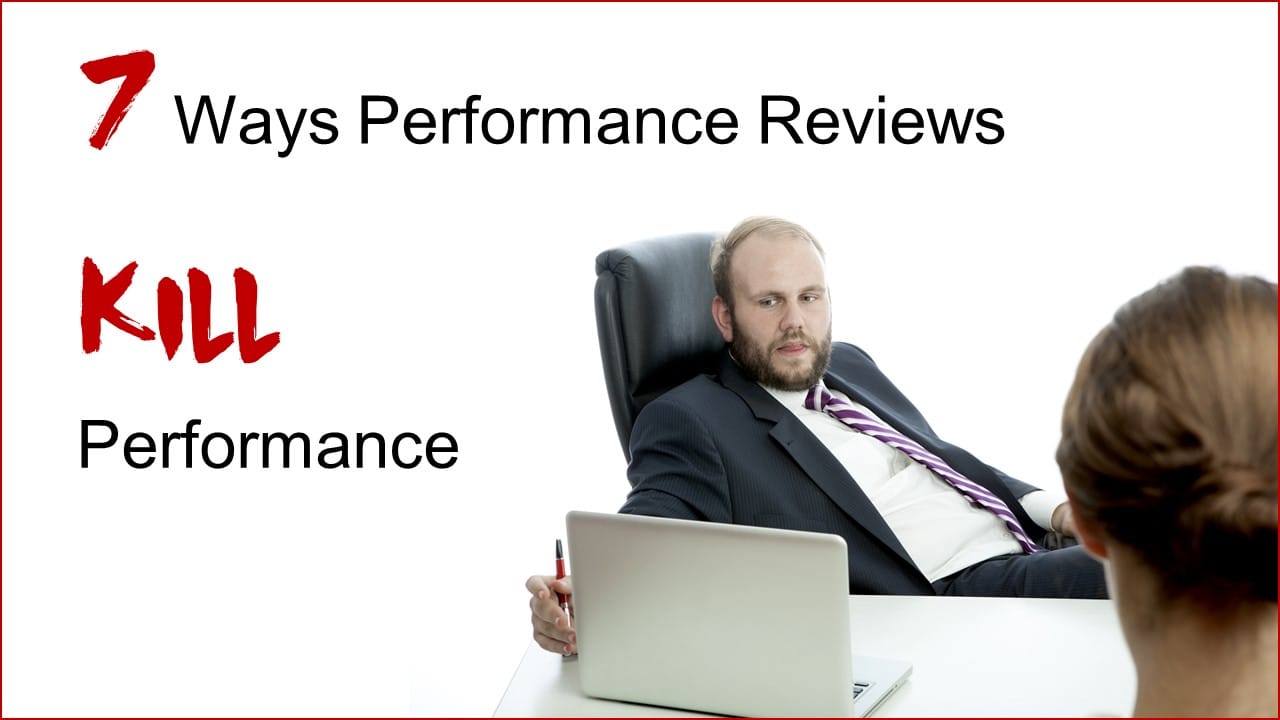 The annual performance review is widely believed to be the least popular practice in business.  An artifact from post WWII corporate America, performance reviews have been described as a “rite of corporate kabuki.”  Stanford University professor and leadership author Bob Sutton says that doing performance evaluations well is like “doing blood-letting well — it is a bad practice that does more harm than good in all or nearly all cases.”

Here are seven important reasons why organizations need to put an end to the torture test known as performance reviews.

For decades, employment lawyers have been advising HR professionals to make sure managers record employee’s poor performance “in case we need evidence to support their termination in the future.”  That may be sound legal advice, but it’s a sure-fire way to destroy trust.

Imagine if your spouse recorded all of your major blunders and then reviewed them with you once a year?  When your spouse brings them up again in the annual review you’d probably think “Haven’t we moved on from that?” right before the feeling of betrayal sets in.  Sensing your concern, your spouse then responds “Oh, don’t worry honey… my lawyer just told me I should record these things in case we get divorced to make sure I have the advantage in the divorce proceedings.”

How motivated would you be to put your heart and soul into that relationship?  How likely would you be to make personal sacrifices for the person who is preparing to destroy you in case things go sideways?  The very act of keeping a record of the things that someone else does wrong creates an adversarial relationship, provoking suspicion, distrust, and disengagement.

2) Your Best Employees Hate It

People who believe that their talents can be developed have what researcher Carol Dweck calls a “growth mindset”.  They tend to be higher achievers than those with a fixed mindset (who believe their talents are innate) because they worry less about looking smart and they put more energy into learning.

Since feedback is critical to high performance, it should come as no surprise that people with a growth mindset are more likely to seek and accept critical feedback… except when it comes in the form of a performance review.  A 2013 study revealed that people with a growth mindset, presumably your best employees, find negative feedback delivered in performance reviews just as offensive as those with a fixed mindset.  Although the researchers didn’t have an explanation for this finding, the answer is fairly obvious.

A Gallup study revealed that three out of four people suspect their performance evaluations are unfair and inaccurate; and their hunch is right.  90% of HR professionals, the ones who should know if performance reviews work, believe they are inaccurate. Whether you’re a star employee or not, everybody hates being evaluated by a flawed system that produces inaccurate and unfair results.

3) Encourages People to Argue, Not Listen

When people’s performance rating directly impacts their compensation, they are highly motivated to fight for a higher performance rating.  In fact, performance reviews trigger the same fight-or-flight response that occurs “when there is in imminent physical threat.”

Result?  People aren’t listening to any critical feedback.  Instead, people on the receiving end of a performance review transform into courtroom lawyers, scrutinizing the weaknesses in the prosecution’s argument so they can present their counterargument.  When performance reviews are tied to compensation, not only does it discourage people from accepting feedback, it encourages them to dodge accountability.

Performance reviews are designed to be a one-way feedback mechanism.  Scheduling a time to provide one-way feedback effectively communicates to employees “My opinion is the only one that counts because I’m more important than you.” It’s as if the performance review was intentionally designed to subliminally convince employees that they are in a master-servant relationship.

Samuel Culbert, a professor at the UCLA Anderson School of Management, and author of Get Rid of Performance Review argues that performance reviews are about “power and subordination” and that they “instill feelings of being dominated.”

To be required to sit through a one-way feedback session is a form of emotional and psychological abuse that subtly erodes the confidence of the person on the receiving end.  Since confidence is essential to high performance, it should come as no surprise that a meta-analysis of 607 studies published by The Psychological Bulletin revealed that employees’ performance actually decreased 30% of the time after performance reviews.

David Rock, director of the Neuro Leadership Institute and author of Your Brain at Work, discovered that performance reviews encourage a fixed mindset, which inhibits learning.

Performance reviews encourage people to “become more conservative” writes Rock.  “They set their goals low to ensure that they are seen as succeeding.”  When feedback is used to determine a performance rating, employees “retreat from candid conversations about development, because the whole issue of progress and feedback is so emotionally charged.”

Feedback is only useful if it is specific to one issue and provided within a short period of time.  People need time to digest feedback and determine what to do with it.  Multiple pieces of feedback coming at people at once tends to be overwhelming and difficult to process, accept, and act on, rendering the feedback useless.

Waiting until the end of the year to let employees know where they stand sets people up for failure.  Managers who save up their most meaningful feedback until the end of the year allow employees to continue floundering when they could have otherwise been succeeding.  Of course, most managers provide snippets of feedback throughout the year, but its only during the annual performance review that managers feel obliged to be totally transparent about employee’s performance so they can use it to justify a lower pay increase than the employee would like.

Instead of providing feedback one issue at a time and in a timely fashion, annual performance reviews encourage managers to bundle feedback and share it when it’s too overwhelming to absorb and too late to do anything about.  That’s the opposite of useful.

Managers who save up their most meaningful feedback until the end of the year allow employees to continue floundering when they could have otherwise been succeeding.

7) Wastes a Tremendous Amount of Time

A 2017 survey by Deloitte revealed that 82% of companies believe that performance reviews were not worth the time.  Deloitte knows this better than most.  After adding up how much time their firm was spending completing the forms, holding the meetings, and creating the ratings, Deloitte discovered that it was spending 1.8 million hours a year on performance management tasks.

But that wasn’t their most important discovery.  After tabulating and categorizing the time performance reviews take, they realized that most of their time on performance management was spent talking about people, not talking to people.

Imagine if, instead of filling out forms and talking about employees, managers in your organization spent that time talking to employees, providing them with timely coaching and feedback to accelerate their progress.  It makes you wonder how many other organizational problems would disappear as a result.

A Better Way to Improve Performance

The Definitive Guide To Enlightened Performance Management provides detailed instructions for business leaders, HR leaders and managers, and covers topics such as: 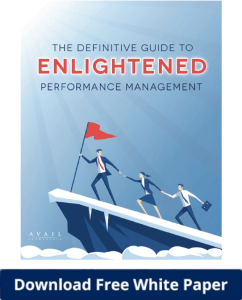