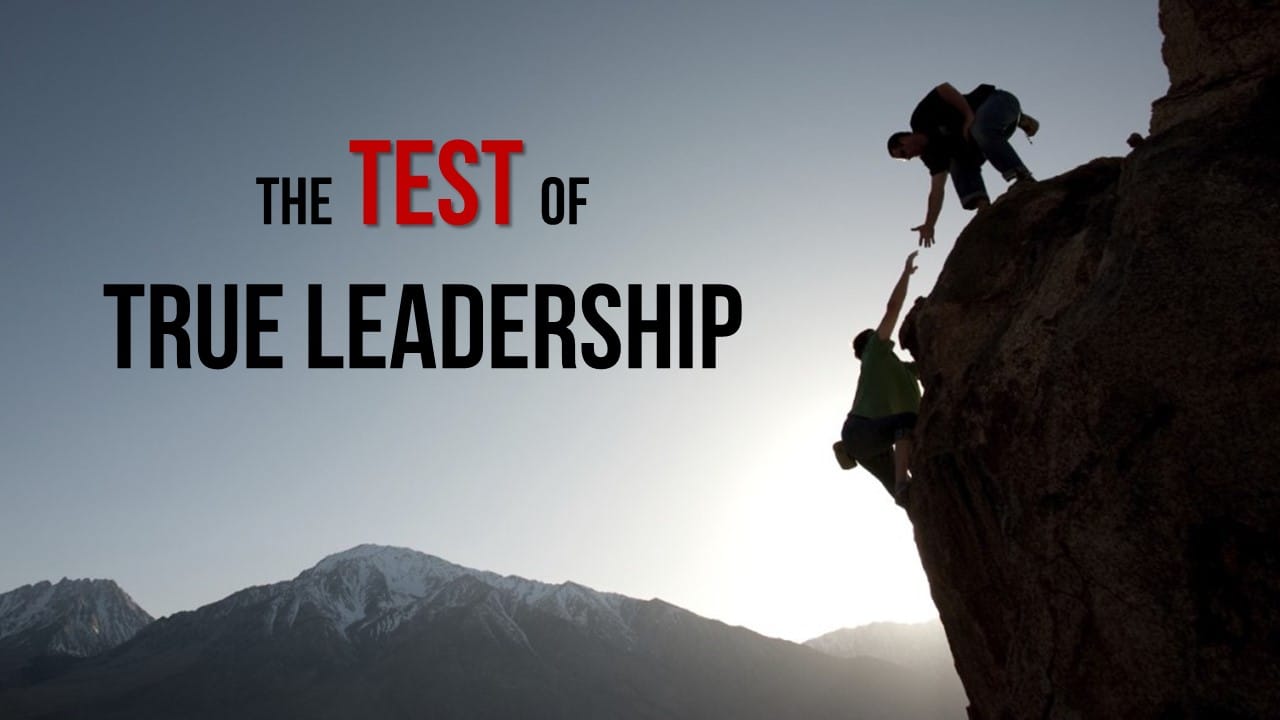 The Test of True Leadership

With all that’s been written about leadership, it’s surprising how much misinformation exists on the subject. Leadership is not the mysterious cosmic force that it’s been made out to be. It isn’t an art, and it has little to do with charisma.

Before I share possibly the most succinct and complete definition of leadership I’m aware of, and a way to discover if you are a true leader, let’s first clear up what leadership isn’t.

The False Dichotomy of Management Versus Leadership

Social media posts are full of tables and infographics like the one below contrasting management with leadership.

Definitions that pit management against leadership like this are garbage. Like soda pop for the brain, this simple way of differentiating managers and leaders might taste good to consume, but in the end, it’s just empty calories.

This soda pop definition of managers versus leaders simply separates the operational activities of management from the strategic. At worst these caricatures demonize the term “manager,” making it synonymous with “bad leader.” Consequently, the word “manager” has become something of a repugnant term in modern business literature.

You are only a leader when others willingly follow you because they trust and respect you, not because they fear the consequences of not doing so.

There are basically only two ways people can influence others.

Leadership is the skill of getting others to move in the right direction without coercing them. Any time someone leans on their formal authority to get compliance, they cease to be a leader.

Leaders Care About People and Results

People in leadership positions who are primarily concerned with getting results tend to rely on coercion to get those results. Leaders, on the other hand, care as much about the people they lead as they do about achieving the desired results. Leaders demonstrate that employment is a contract and a relationship. The contract is the exchange of value—labor for money. The relationship is about how employees feel about their work, their boss, and the organization that employs them.

People don’t decide how hard to work or when to quit based on the stated or implied employment contract. Human beings make decisions based on their feelings and simply refer to facts to justify their decisions. This is why the relationship portion of employment is as important, if not more important, than the details of the stated or implied employment contract. True leaders have a dual focus on people and results—the relationship and the contract.

Leaders care as much about the people they lead as they do about achieving results.

Leadership is about helping others reach their potential while also ensuring that the team achieves its goals. If we distill this observation down to its simplest form, we are left with the following definition of leadership.

Leaders elevate others to achieve a common goal.

Based on this definition, who can be a leader? Is the title of “leader” reserved only for the heads of companies or other organizations? Must one be an executive to be a leader? The beautiful truth of leadership is that anyone can be a leader if they want to. Leadership begins with caring about people and results. The rest is learnable.

The Litmus Test of Leadership

How can you know if you are truly a leader as opposed to someone who simply occupies a leadership position? The answer to this question can be found in the analysis of the definition of leadership. Let’s take a closer look at the key elements of leadership.

These three elements of leadership—elevate others, positive change, and achieve a common goal—combine to produce willing followers. Therefore, the litmus test of leadership is the answer to this question:

Would anybody willingly follow me if they weren’t being paid to do so?

Based on this test, how many people in positions of authority are really leaders?

The above definition and test of leadership may sound like the ideal because it is so far from the norm, but this is how true leadership works, and it is possible. Maya Angelou famously wrote, “I’ve learned that people will forget what you said, people will forget what you did, but people will never forget how you made them feel.” How did she learn this? Angelou worked with Martin Luther King Jr. as a civil rights activist and fundraiser. King inspired Angelou to adopt and achieve his dream because, in her words, “He was a prince of peace” and dispensed “a comfort of courtesies while trying to make wrong right.” On another occasion she said of King, “He had no arrogance at all. He had a humility that comes from deep inside.” King’s influence undoubtedly elevated Angelou to reach a potential she likely wouldn’t have dared imagine before meeting him.

Abraham Lincoln’s biographer wrote that “The powerful competitors who had originally disdained Lincoln became colleagues who helped him steer the country through its darkest days.” Edward Bates was one of Lincoln’s rivals for the presidency. Lincoln eventually appointed him as attorney general. Even Bates, who initially viewed Lincoln as a well-meaning but incompetent administrator, eventually concluded that Lincoln was an unmatched leader, “very near being a perfect man.”

Fortunately, you don’t have to be perfect to be a leader. You simply need to care deeply about people and results.

Discover how to demonstrate that you care deeply about people and results by learning three powerful accountability habits in my new book: How Leaders Can Inspire Accountability.