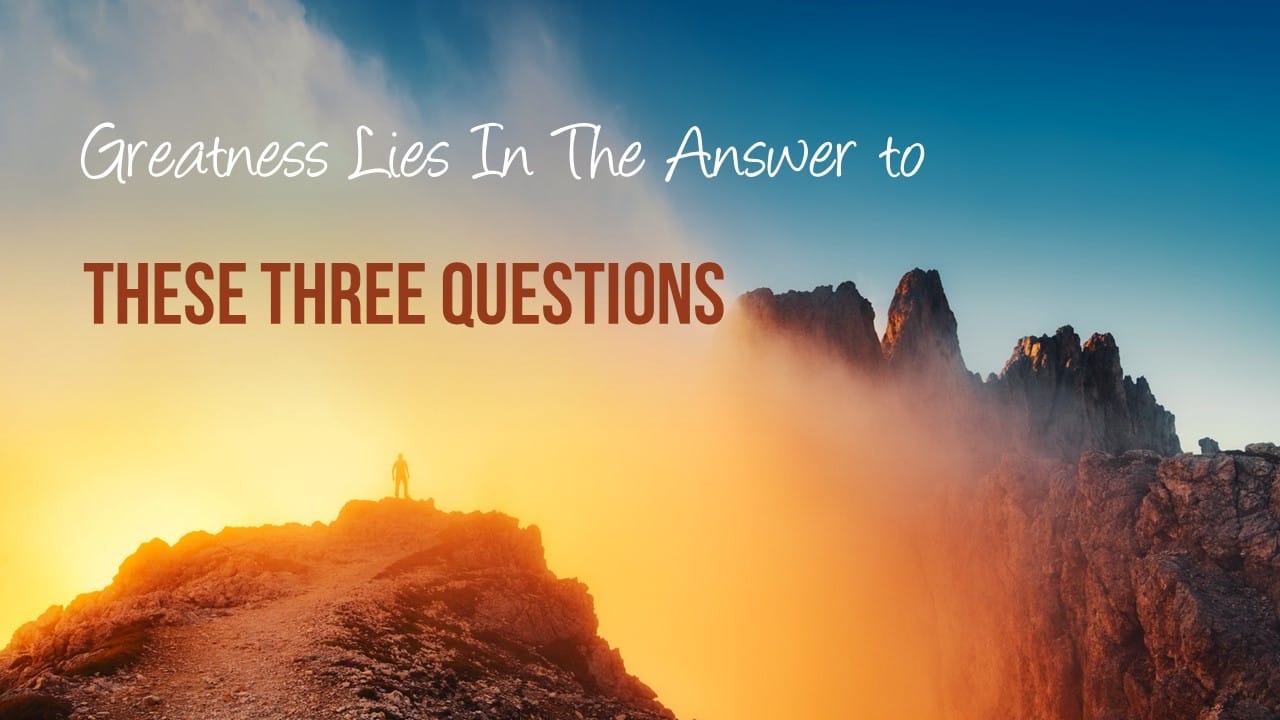 Greatness Lies In The Answers To These 3 Questions

What is greatness?  Most of us want to be great in some way, but we all know that it’s a pretty exclusive club to get in to.  So most people don’t go for it.  Some because they don’t feel they could ever attain greatness.  Others might want to attain greatness but do not know how.

No matter how you define it, greatness is inextricably linked to leadership.  Think about it.  How many great people can you think of that didn’t inspire others to take positive action?  Even if they never held a formal leadership position, all great people inspire positive action in others—which happens to be the simplest and most correct definition of leadership.

The genesis of greatness and leadership lie in the answers to these three questions:

What do I believe?

Our beliefs motivate and guide our actions.  Great leaders and great companies answer this question for themselves and then turn their answer into statements to let everyone else know what they believe.

One of the strongest, most pervasive human needs is the need to belong.  Author Simon Sinek observed that the way we fulfill this need is by seeking out others who share our beliefs.  Tapping into this basic human need is the most powerful way for a leader, or company, to attract followers—people to help move the cause forward.  Great leaders have strong beliefs about the world, and they don’t keep these beliefs to themselves.

In the 1970’s, Southwest Airlines founder Herb Kelleher believed that air travel should be accessible to the common man—simple, affordable and fun.  Announcing those beliefs, and making all their decisions based on them, the company rallied the masses to their cause, and enabled Southwest Airlines become one of the most profitable airlines in the world.

Google founder Larry Page believed that all of the information on the internet would be so much more powerful and useful if it were organized and easily accessible.  Some of the often-stated Google beliefs are a) fast is better than slow, b) democracy works on the web, and c) the user experience is all that matters.  The rest is history.

[bctt tweet=”Strongly held beliefs that take a stand against the status quo act like a magnet, attracting followers.” via=”no”]

For beliefs to be useful to an individual or a company, they must get out of the leader’s head and onto paper so that others can identify with them.  This is most often articulated in a values statement (although beliefs are different than values, but that’s a topic for another article).  Strongly held beliefs that take a stand against the status quo act like a magnet, attracting like-minded customers, employees, and investors to the cause.

What am I going to do about it?

Great leaders don’t just take a stand, they outline a plan of action to make the world a better place.  In the dark beginnings of World War 2, Churchill refused to engage in peace talks with Hitler (which would have effectively meant defeat).  Instead, he offered this plan:

I don’t know about you, but when I read this, my heart-rate increases with every place Churchill says he’s going to fight Hitler. By the end I want to jump out of my chair and fight Hitler!  That’s the kind of reaction leaders need to evoke in their followers when they describe their plan of action.

A company’s plan begins with a purpose statement declaring how they intend to make the world a better place.  It is not a statement designed to appease every possible special-interest group, packed full of words like “efficiently” and “effectively”, and wordsmithed by a lawyer.  A company’s purpose should spring naturally from the company’s beliefs, should use simple language to outline an ambitious high-level plan, and inspire hope that it can be accomplished.

Steve Jobs’s mission statement for Apple in 1980 was: “To make a contribution to the world by making tools for the mind that advance humankind.”  A good purpose statement must be simple, memorable, and it must evoke emotion.  Anything else is corporate PR that’s a waste of ink and effort.

[bctt tweet=”Profit is the outcome of fulfilling the company’s purpose well, and the fuel to fulfill its purpose better.” via=”no”]

If you’re a business leader, ask five different employees today what they think your company’s purpose is.  If you get a lot of different answers, or if someone says “to make a profit”, then take the next step on the path to great leadership and give them a compelling purpose to rally around.

Hopefully when you ask this question, you don’t get the deafening silence that Jerry Maguire did.  The ultimate litmus test of leadership rests in the answer to this question: “Would anyone follow me if their livelihoods didn’t depend on it?”

[bctt tweet=”The ultimate litmus test of leadership is: “Do I have any willing followers?”” via=”no”]

Zappos, an online shoe retailer, stands for exceptional customer service.  When Zappos metaphorically says “Who’s with me?” their customers self-identify as people who are fed up with crappy customer service.  Their customers don’t mind paying a premium, or mind waiting to try on their shoes, because when they make a purchase, they’re really making a statement about the kind of company they want to support.

You’re not a leader unless you are asking others to join you in taking some action that they would not normally take.  When you extend invitations to potential employees, customers, and investors, does your pitch sound like “Together we can make the world a better place – are you with me?”  If it doesn’t, go back to question #1 and start the process over again.