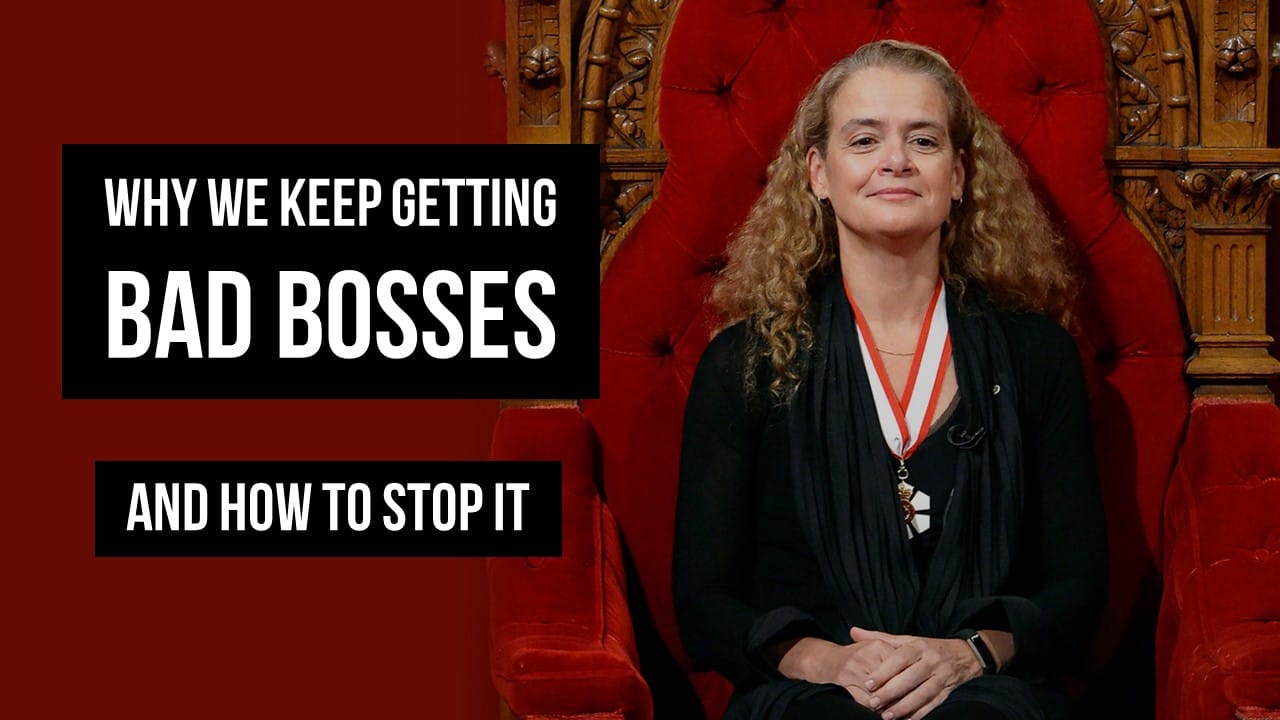 Why We Keep Getting Bad Bosses and How to Stop It

Julie Payette is an engineer, a scientist, and a former astronaut who speaks six languages, is a critically acclaimed musician, has held executive positions at the Montreal Science Centre and the Canadian Olympic Committee, and has a school named after her.  By anyone’s standards, she is an extremely accomplished individual.  That must mean she’s a great leader too, right?  Wrong.

That line of thinking, that a great resume equals leadership ability, is precisely why terrible leaders continue to be hired and promoted into top leadership positions within business, government and non-profit organizations throughout the world.  How many times have you seen examples of terrible bosses and thought to yourself How in the world did they get that job?  The answer is staggeringly basic.  Most organizations don’t make leadership ability the primary criteria for promotion and use a consistent standard to assess leadership ability.  It is that simple.

That was Prime Minister Justin Trudeau’s mistake when he made Julie Payette the Governor General of Canada.  His mistake was compounded by the fact that a simple reference check would have revealed that she received complaints of mistreating staff at both her previous executive positions.

Payette resigned from her position as Governor General on January 21, 2021 after a damning workplace investigation revealed that she was the epitome of a toxic boss.  Payette presided over a department of more than 120 government employees.  About half of the current and former employees interviewed in the investigation described the general work environment as “hostile, negative or other words to that effect.”  A quarter of the respondents specifically used the words “toxic” or “poisoned.”

More disturbing than the sheer number of complaints were the descriptions of Payette’s leadership style.  For instance, Payette frequently required her staff to huddle around her on flights home from trips abroad where she routinely criticized them in front of their peers.

A former employee said “I would say in almost every meeting somebody was berated. There was, I’ll go as far to say, a victim at every meeting.”

A government source added “She needs to control absolutely everything. If things don’t go the way she wants it to go, she needs to find someone responsible for it.”

Payette would also put staff on the spot by quizzing them about space, such as asking them to name all the planets in the solar system, or to state the distance between the sun and the moon.  “She loves these gotcha moments,” said another source. “She’s just smarter than you and she likes to let you know that.”

As a result of the work environment Payette created, sixteen of the people interviewed in the investigation left their jobs within a year of each other, and another thirteen reported taking sick leave.

As is often the case, employees in the Governor General’s office had no way to report the abuse without reprisal. Human resources was seen as simply a middle man with no influence to make any changes.

There is a pervasive flaw in human perception and reasoning which tends to propel precisely the wrong people into leadership positions.  This error of cognition is that we tend to confuse confidence with leadership ability.  Consequently, self-promoters who come across as confident, charismatic, and bold, often get the top jobs.  The problem is, there is very little correlation between confidence and leadership ability.  “We assume that confident people have more potential for leadership,” states leadership researcher Thomas Chamorro-Premuzic, “but in any area of talent, including leadership, there is very little overlap between confidence—how good people think they are at something, and competence—how good they actually are at something.”

There is, however, a correlation between overconfidence and a) low self-awareness, b) lack of empathy, and c) selfishness.  People who are certain of their own rightness in any situation tend to try to force their will on others, squash dissenting perspectives, and attack anyone who dares criticize them.  This might explain why studies have shown that psychopathy and narcissism are about five times more prevalent among executives than the general population.

Overconfident people with low empathy have no problem bullying others into submission to advance their own agenda or grinding value out of subordinates to elevate themselves.  Ironically, the self-assertive qualities that propel people into leadership positions are the same qualities that tend to make them terrible leaders.

High-performing jerks continue to be found among the leadership ranks in many organizations.  However, employees who have the greatest positive impact on people and results can fly under the radar because they prioritize team success over their own glory.  A study by the National Bureau of Economic Research revealed that the better an employee was at sales, the worse they were at managing others.  The study also revealed that the inverse was true. Sales actually increased under managers who produced lackluster results in their previous sales roles.

In explaining their findings, the authors of the study noted that star individual performers tend to collaborate less with their sales colleagues. When more collaborative but less successful salespeople were promoted to manager, their teams achieved 30 percent more sales than teams led by less collaborative managers who were previously more successful as salespeople.

This phenomenon is as true in sports as it is in business. Star baseball players, for example, might be able to hit home runs and sell admission tickets, but they don’t necessarily win games. The movie Moneyball tells the story of how Billy Beane, the general manager of the Oakland Athletics, forever changed the game of baseball in 2002 by exploiting this fact.  After assembling a team of low-profile players who played more for their team’s success and less for their own personal glory, Beane’s club went on one of the longest winning streaks in baseball history and was able to compete with baseball teams that had more than three times as much money to spend on players. Beane himself was a baseball player who didn’t live up to expectations but who flourished as a general manager.

To be sure, technical competence is strongly corelated with leadership performance.   However, the best leaders were often not the top individual performers.

Create a Standard of Leadership for Your Organization

One time when I spoke at the California HR Conference, I asked a room of 200 heads of HR the following question: “How many of you have a consistent criteria for promotion that management all agrees to and applies when making promotion decisions?” Zero hands went up.

The reason we have an overabundance of managers with poor leadership skills is because most organizations have not provided a realistic description of what good leadership looks like.  Consequently, they have no established standard of leadership to help them decide who to hire or promote into a leadership position.

Instead, my clients ask their employees to be themselves and embrace their unique talents and non-talents that make them who they are. They just ask their employees to work on developing a few habits that, when added to their existing collection of unique strengths, will help them become exceptional leaders.

Not all good leadership behaviors produce an equally positive impact. Some leadership behaviors are more potent than others. I facilitate focus groups within client organizations to discover the highest impact behaviors that consistently lead to successful outcomes. To accomplish this, we reverse engineer their organization’s success stories to identify patterns of behavior that enabled or facilitated their successes.  The result of this process is that clients identify the three or four most impactful leadership competencies for their organization that apply across all levels of leadership.  These leadership competencies come with precise behavioral descriptions that almost anyone can learn, regardless of personality type.

Defining what great leadership looks like is the essential first step toward establishing more humane workplaces.  The next steps are for current leaders to exercise these learnable, high-impact leadership behaviors themselves, and then to commit to only hiring or promoting people into leadership positions who exhibit them.

Defining what great leadership looks like is the essential first step toward establishing more humane workplaces.