Are You a Talent Developer or Talent Waster?

Few leaders have earned a reputation for being an exceptional talent developer… but they’re out there.

You may have heard of some of them.  In professional football, 20 of the NFL’s 32 head coaches trained under Bill Walsh or under someone in his coaching tree. In hedge funds, Julian Robertson, the founder of the investment firm Tiger Management, spawned the careers of dozens of top fund managers. And from 1994 until 2004, nine of the 11 executives who worked closely with Larry Ellison at Oracle and left the company became CEOs, chairs, or COOs of other companies.  Author Sydney Finkelstein calls these talent developers “Superbosses.”

These exceptional leaders didn’t just build organizations; they developed a new generation of leaders.  Unfortunately, most executives and middle managers don’t think or act the way Superbosses think and act.  Why?  Probably because they barely have enough time to get their own work done, let alone make it their personal mission to develop a legion of future leaders.  That might sound like a cop out, but it’s a reality in many cases.  Most of us would love to consistently build the skills and capacity of those who work for us, but the urgent crises of the day tend to keep executives and managers in fire-fighter mode far more often than in capacity-building mode.

Smart business leaders recognize this inherent conflict and they’re doing something about it.  They are making leadership and career development an organization-wide priority and are putting a system in place to make it the cultural norm.

The Common Denominator of Industry-Leading Companies

Here are a few examples of industry-leading companies and what they do that demonstrates their commitment to leadership and career development.

The industry-leading companies highlighted above are all massive companies with huge budgets.  So how can average companies become exceptional talent developers?

Answer: they systematize it.

I mostly work with mid-sized companies that aspire to greatness.  They don’t have massive budgets for training and development, but they want to make the most of what they do have.  I show them that becoming a world-class developer of talent doesn’t take a lot of money, but it does take strong desire and discipline.

Some organizations already have a system in place for ongoing leadership development.  It’s called a succession plan.  I’m not talking about the document that simply identifies who will take over for whom in case an executive unexpectedly leaves.  That’s called a replacement plan, and the only thing it’s good for is collecting dust on the CEO’s shelf.  I’m talking about a rigorous system where a “People Committee” reviews internal candidates against well-established promotion criteria, and then comes up with creative, customized development plans for those who meet the criteria.  (Ya, this actually happens in some companies.)

As great as that sounds, it’s still not good enough to become a world-class talent developer.  Succession plans tend to focus on about 20% of the workforce—the handful of people who want greater leadership responsibility and who are demonstrating the leadership characteristics which are considered most important in their company.  What about the other 80% of their employees?  Are they less worthy of developing? 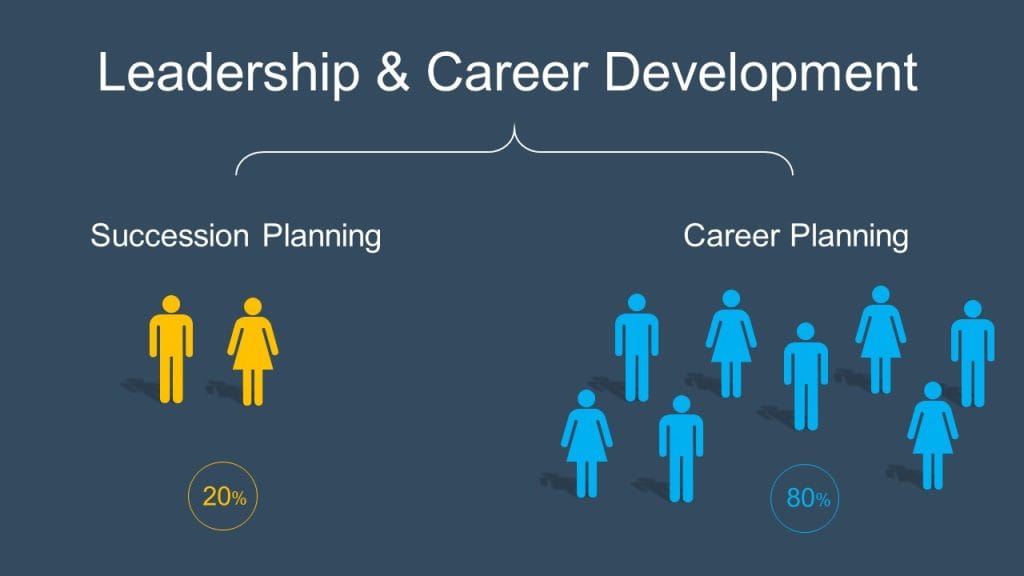 World-class talent developer organizations implement the mechanics and best practices of succession planning, and then expand aspects of the succession process to include all positions.  This way, all employees receive a rigorous development plan, while the organization can focus strategic energy and resources on the few employees who are the most prepared (at any given time) to take on greater leadership responsibility.

And by the way, this doesn’t take much money, just the corporate will to make leadership and career development a top strategic priority.

The Mechanics of a World-Class Leadership & Career Development System

I have never seen anyone’s career development be fast tracked using this approach.

Organizations that are serious about career development make career development conversations a separate process.  When they do, they signal to their managers that one of their key responsibilities is the development of their staff.  Employees, in turn, get the message that their employer cares about them enough to develop them.

Most companies I know of think of their strategic priorities in this order:

As I pointed out in this article, companies that order their priorities in this way are putting the cart before the horse.

At the corporate strategy meeting, when the conversation finally turns to people, virtually all the time is spent talking about headcount.  “HR, go find the people we need to make our strategy work!” the other executives demand.  Now, if your corporate strategy is dependent on hiring a whack of entry-level positions, then maybe that might work.  But that’s rarely the case.  More often than not, achieving ambitious strategic objectives requires the addition of highly skilled technical experts, and highly experienced leaders.  Good luck finding enough of those in today’s labour market conditions.

Smart companies don’t leave their strategy to chance, and they don’t hope that they will find enough of the right kind of people.  Smart companies know exactly how many people they have who are prepared, or being prepared, to take on critical roles, and when they will be available.  And they know this before they sit down to discuss corporate strategy.  They know this because they are constantly talking about their people in regularly scheduled “People Strategy Meetings” that precede corporate strategy meetings.  In other words, they put their people first, and position them at the heart of their corporate strategy. 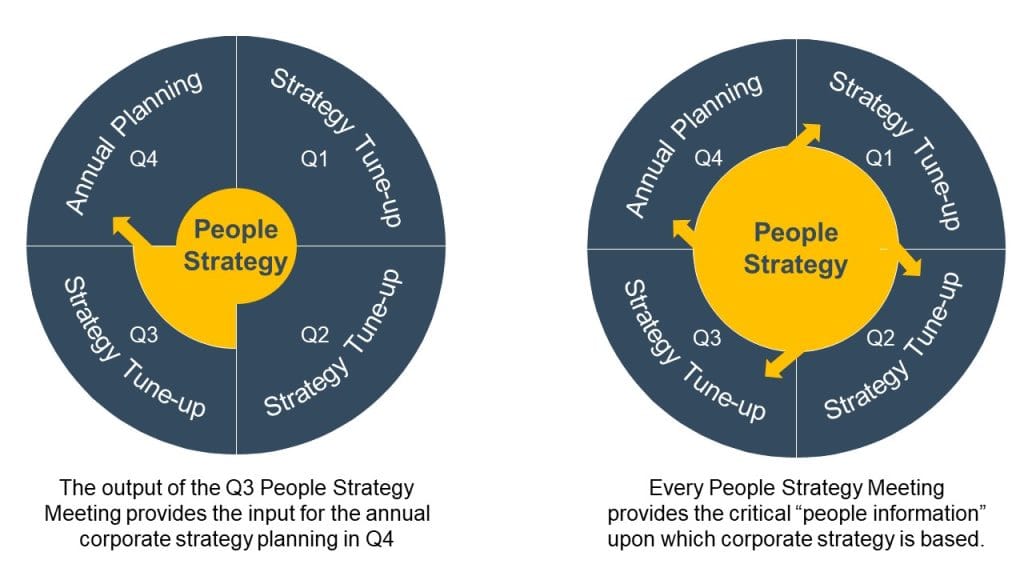 Ideally, corporate strategy will be done once a year followed by quarterly strategy tune-ups (strategy expert, Rich Horwath, details this process in his book Deep Dive).  Prior to each quarterly strategy meeting, the “People Committee” meets to review their top talent and how they are progressing in their development plans.  This gives the executive team precise information about the talent available to them when they discuss the feasibility of their corporate strategy objectives and milestones.

[bctt tweet=”World-class organizations put their people first, and position them at the heart of their corporate strategy.” username=”@availleadership”]

Waste Not, Want Not

What percentage of your workforce is languishing in career limbo, left with the distinct impression that if they want to advance their career, they need to go elsewhere?  Whatever percentage you estimate, they represent the talent your organization is wasting.  And it’s a good bet it’s those same people who are not engaged and productive in their work.

Organizations don’t have to continue wasting their talent any longer.  Lack of budget is not an excuse.  Make leadership and talent development a top strategic priority and join the elite league of industry leading companies, who, not surprisingly, are also world-class talent developers.

Check out the book that has received critical acclaim as “an invaluable guide for identifying, and taking advantage of, talent within organizations.”